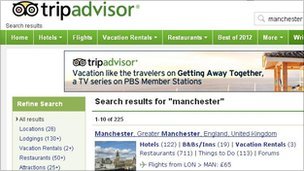 TripAdvisor has been ordered to rewrite some of its marketing claims by the UK's Advertising Standards Authority.

The ruling follows complaints by hotels that the site had said that its holiday reviews could be "trusted".

The ASA said it was concerned that consumers might be fooled by fraudulent posts since the entries could be made "without any form of verification".

TripAdvisor described the ruling as a "highly technical view" of "copy that was used in a limited capacity".

However, the watchdog said that the ruling served as a warning to all UK-focused sites with user-generated material.

The ASA said that the US-based firm's site originally carried statements saying that it contained "reviews that you can trust" and that it had "more than 50 million honest travel reviews".

It said that two hotels and the online reputation firm Kwikchex, which represented others, had complained that the claims were misleading since they could not be substantiated.

The advertising body said it acknowledged that reviewers were asked to sign a declaration that their reviews were real and that they had no incentive or competitive interest with the places commented on.

It also recognised that the site said that it used "advanced and highly effective fraud systems" to identify and remove fake content.

However, the ASA said it was still possible that "non-genuine" reviews could appear on the site undetected and that users might not be able to spot them.

It warned that this was particularly a problem in cases where an establishment only had a small number of reviews. It added that offering hoteliers a right to reply did not fully address the problem.

The ASA ordered the site to avoid running adverts in the same form again and said it must not claim or imply that all its reviews were from real travellers, or were honest, real or trusted.

"This should be regarded as a benchmark ruling which applies to all web sites which make claims about the reliability of their user-created content," the ASA's spokesman Matthew Wilson told the BBC.

Chief executive Guy Parker said that advertising rules policed by the authority applied to companies' claims on their own websites.

"This is a classic example of the sort of thing that members of public are complaining to us about," he said.

"Advertisers must apply the same scrutiny to their websites, as they do to their campaigns in paid-for space. And don't major on trustworthiness if fake reviews can appear."

The ASA's ruling was based on a survey of the site carried out in July 2011 when it was still owned by the travel booking service Expedia.

It has since been spun off as a separate entity. The current management downplayed the risk of customers being misled.

"We have confidence that the 50 million users who come to our site every month trust the reviews they read on TripAdvisor, which is why they keep coming back to us in increasingly larger numbers to plan and have the perfect trip," it said in a statement.

The tripadvisor.co.uk homepage now contains no reference to the word "trust" and simply describes itself as "the world's largest travel site".

However, its international tripadvisor.com address - which is accessible in the UK - continues to describe its content as the "world's most trusted travel advice" in the corresponding part of the page. It adds elsewhere that "you'll find real hotel reviews you can trust".

When asked about this the ASA said that its remit only extended to claims targeted at a UK audience, so it would not be pursuing changes at the .com site.