Did you know? Kenya was the home of the real notorious man-eaters as seen in the movie: The Ghost and the Darkness

The Tsavo Man-Eaters were a pair of notorious man-eating lions responsible for the deaths of a number of construction workers on the Kenya-Uganda Railway from March through December 1898.

In March 1898 the British started building a railway bridge over the Tsavo River in Kenya. The project was led by Lt. Col. John Henry Patterson. During the next nine months of construction, two maneless male Tsavo lions stalked the campsite, dragging Indian workers from their tents at night and devouring them. Crews tried to scare off the lions and built campfires and bomas of thorn fences around their camp for protection to keep the man-eaters out, to no avail. The lions crawled through the thorn fences. After the new attacks, hundreds of workers fled from Tsavo, halting construction on the bridge. Patterson set traps and tried several times to ambush the lions at night from a tree. After repeated unsuccessful endeavours, he shot the first lion on December 9, 1898. Three weeks later, the second lion was found and killed. The first lion killed measured nine feet, eight inches (3 m) from nose to tip of tail. It took eight men to carry the carcass back to camp. The construction crew returned and completed the bridge in February 1899. The exact number of people killed by the lions is unclear. Patterson gave several figures, claiming that there were 135 victims.[1][2]

Patterson writes in his account that he wounded the first lion with one bullet from a Martini-Enfield chambered in .303 caliber. This shot struck the lion in the hindquarters, but it escaped. Later, it returned at night and began stalking Patterson as he tried to hunt it. He shot it with a .303 Lee Enfield several times, tracked it the next morning, and found it dead. The second lion was shot five times with a .303 Lee Enfield, but it got up and charged him in severely crippled condition, whereupon he shot it three more times with the Martini-Henry carbine, twice in the chest, and once in the head, which killed it. He claimed it died gnawing on a fallen tree branch, still trying to reach him.[3]

After 25 years as Patterson's floor rugs, the lions' skins were sold to the Chicago Field Museum in 1924 for a sum of US$5,000. The lions' skins arrived at the museum in very poor condition. The lions were then reconstructed and are now on permanent display along with the original skulls.

Patterson's accounts were published in his 1907 book The Man-Eaters of Tsavo.

The two lion specimens in Chicago's Field Museum are known as FMNH 23970 (killed on December 9, 1898) and FMNH 23969 (killed on December 29, 1898). Recent studies have been made upon the isotopic signature analysis of Δ13C and Nitrogen-15 in their bone collagen and hair keratin and published in the Proceedings of the National Academy of Sciences USA. Using realistic assumptions on the consumable tissue per victim, lion energetic needs, and their assimilation efficiencies, researchers compared the man-eaters' Δ13C signatures to various reference standards: Tsavo lions with normal (wildlife) diets, grazers and browsers from Tsavo East and Tsavo West, and the skeletal remains of Taita people from the early 20th century. This analysis estimated that FMNH 23969 ate the equivalent of 10.5 humans and that FMNH 23970 ate 24.2 humans [4] This leads to the conclusion that the lower number of 35 victims is more likely and that Patterson exaggerated his claims.[5]. It also adds credence to the infirmity theory that the root-tip abscess on the lower right canine of FMNH 23970 (the "first man-eater) triggered the man-eating episode.

However, an earlier (2001) study by Tom Gnoske and Julian Kerbis Peterhans, published in the Journal of the East African Natural History Society, contended that a human toll of 100 or more was possible.[6] The diet of the victims would also affect their isotopic signature. A low meat diet would produce a signature more typical of herbivores in the victims, affecting the outcome of the test.[7] This research also excludes the claims that the lions were not eating the victims they killed but merely killing just to be killing. Similar claims have been made of other wildlife predators. 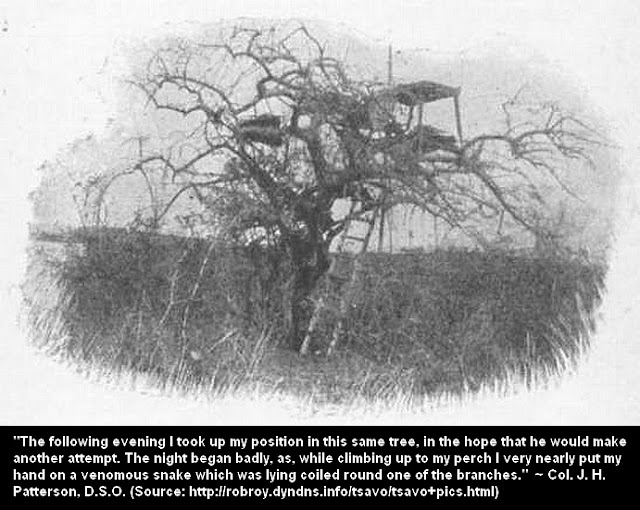 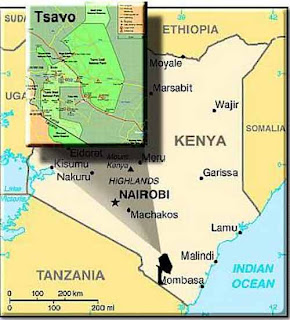 Theories for the "man-eating behaviour" of lions have been reviewed by Kerbis Peterhans and Gnoske (2001) and Patterson (2004). Their discussions include the following:
An alternative argument indicates that the first lion had a severely damaged tooth that would have compromised its ability to kill natural prey. Evidence for this is presented in a series of peer-reviewed papers by Neiburger and Patterson (2000, 2001, 2002) and in Bruce Patterson's (2004) book.

Patterson's book was the basis for the movies Bwana Devil in 1952 and The Ghost and the Darkness in 1996, with the incidents also used in 1959's Killers of Kilimanjaro. The names "The Ghost" and "The Darkness" were names given to the two man-eating lions. The lions also appear as a difficulty to be overcome in the "Cape to Cairo" scenario of Railroad Tycoon II. 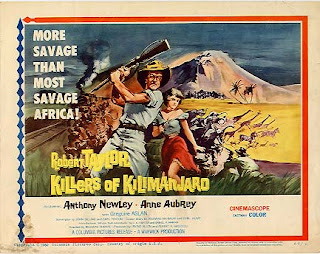