Story by Nicky Furniss taken from the Aboutime Magazine March 2012. 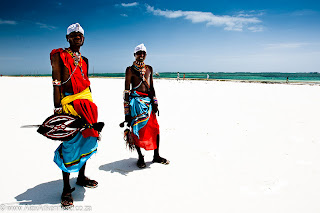 When the very first scheduled 1time flight to Mombasa, Kenya, touched down at Moi International Airport recently, it was met by a tumultuous welcome. Fire engines sprayed the plane with a salute of water, while enthusiastic dancers and Kenyan dignitaries greeted the passengers as they exited the plane. As the very first direct flight from anywhere on the African continent to Mombasa, this was indeed an auspicious occasion. But – as the warm smiles and shouts of “jambo!” we received over the following days bore testament to – special occasion or not, all visitors to Kenya are guaranteed a very warm welcome. 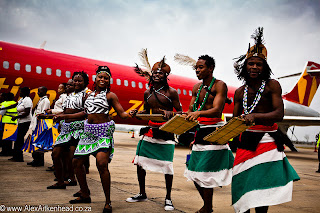 The Island City
Kenya’s second largest city, Mombasa is located on Mombasa Island and has been an important trade and port city since its first estimated origins in 900 AD. These days it still serves as Kenya’s only major seaport and as such, it is a bustling hub of activity. The city boasts a diverse population of Mijikenda and Swahili people, as well as immigrants from the Middle East, Somalia, Pakistan and India, many of whose ancestors were drawn here centuries ago by the spice, gold and ivory trades. As a result, the city is a delightful mix of architectural styles, and Hindu and Muslim temples nestle comfortably beside Christian churches. 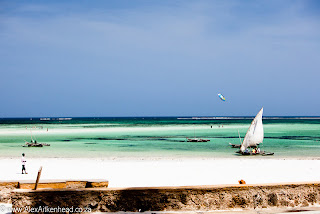 Visitors can relive some of the city’s long history by wandering around Mombasa’s Old Town or visiting Fort Jesus, which was built by the Portuguese in 1593 to protect the old port. In 2011, Fort Jesus was declared a UNESCO World Heritage Site in recognition of the fact that it is considered to be one of the world’s best preserved examples of 16th century Portuguese military fortifications. 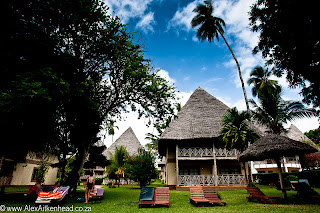 Sun, Sea and Sand
Despite its long history and vibrant multiculturism, Mombasa’s main tourist attraction is undoubtedly its spectacular beaches, lapped by the same warm, crystal clear waters as its more famous beach holiday neighbour, Zanzibar. Sandy white beaches stretch out along the coast on both sides of the city, but we headed south to Diani Beach, a popular resort town just 30 km south of the city. Here a proliferation of luxury resorts – including ours, the Neptune Paradise Village – have made the most of the tropical location, with inviting loungers reclined under swaying palm trees, as well as plenty of powder white sand to lay your beach towel on.

Diani Beach stretches for 25 km down the southern Kenyan coast, much of which is protected by coral reefs. The reefs ensure calm waters, perfect for swimming, and are also a destination in themselves for snorkelers and divers (most resorts in the area have dive operators). The calm water and constant breeze also make this stretch of coastline a favourite with kite surfers, and at any given time of day you are likely to see the horizon filled with multi-coloured kites skidding their riders on the surf behind them. Locals in traditional dhows are also often on hand to take paying customers on sailing trips along the coast where, if you are lucky, you may happen across a pod or two of dolphins.
Even easier to spot are the bands of cheeky black and white Colobus monkeys that play in the resorts’ many trees. And if windows are left open, they have no qualms about casing your room for tasty titbits (and in our case that included the soap!). Speaking of tasty titbits, the hotels here are spoilt for choice in terms of tropical fruit and fresh-as-it-comes seafood, and the evening buffet tables are often groaning under the weight of giant lobsters, seared tuna and barbequed prawns. 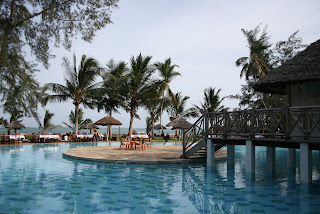 While Diani’s resorts cater to every conceivable need, it would be a waste not to venture out at least once or twice to see what else the area has to offer. We signed up for a day trip with Intra Safaris to the Kisite-Mpunguti Marine National Park, one of Kenya’s nine marine reserves. An hour-long bus ride brought us to the little town of Shimoni. As well as being a convenient boat launching point for the marine reserve, it also has another rather dubious distinction: that of once being a key port from which slaves were shipped all over the world. Visitors can join a guided tour of the Shimoni Slave Caves to learn more about this sad part of Kenya’s history, before heading out on traditional dhows to experience the more pleasant attractions of the marine park. The park’s protected waters often play host to pods of dolphins and its many reefs (teeming with soft and hard corals and brightly coloured tropical fish) are a joy to explore, both for snorkelers and divers.

There are also a number of islands in the reserve, and we stopped for a delicious lunch of local delicacies at Wasini Island. Here we also had the option to while away the afternoon in the lagoon pool, or explore the mangroves via the Wasini Women’s Boardwalk, a local community support programme.

The Gateway to Kenya
With the launch of 1time’s new route to Mombasa, South Africans will now have a completely new beach destination to explore, complete with palm trees, friendly locals and a picture perfect coastline. Mombasa is also the perfect launch pad from which to explore the rest of Kenya, including the famed Masai Mara, snow capped Mount Kenya and the Rift Valley, thanks to domestic flights linking Mombasa and Diani (which boasts its own airport) to many of these attractions. 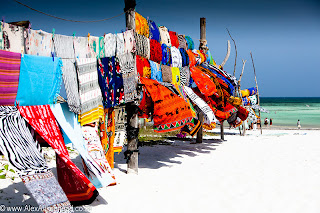 The Kenyan government is also hard at work to make the country more accessible and attractive to foreign tourists. According to the Kenyan Minister of Tourism, the honourable Mr Balala, a number of highways and roads linking Nairobi to the country’s major tourist attractions have been upgraded, and there are plans to begin work on a bypass that will link Mombasa to Diani and the southern coast. This will effectively bypass the need to take a car ferry (which currently adds about half an hour to the trip to Diani), and will make the south far more easily accessible. There are also plans to upgrade many of the country’s airports.

With the wholehearted support of the Kenyan Government, 1time’s new route to Mombasa will now make it possible for South African tourists to explore even more of the African continent, and to add their voices to those of their welcoming hosts with enthusiastic cries of: “Jambo!”

A Couple of Good Reasons to Visit Kenya
- Kenya boasts 59 national parks, including the famed Masai Mara National Reserve
- The country offers a host of diverse cultures (42 different languages are spoken here)
- Kenya boasts 480 km of white beaches and 240 km of protected coral reefs
The country has no less than 38 golf courses

Story by Nicky Furniss taken from the Aboutime magazine March 2012.