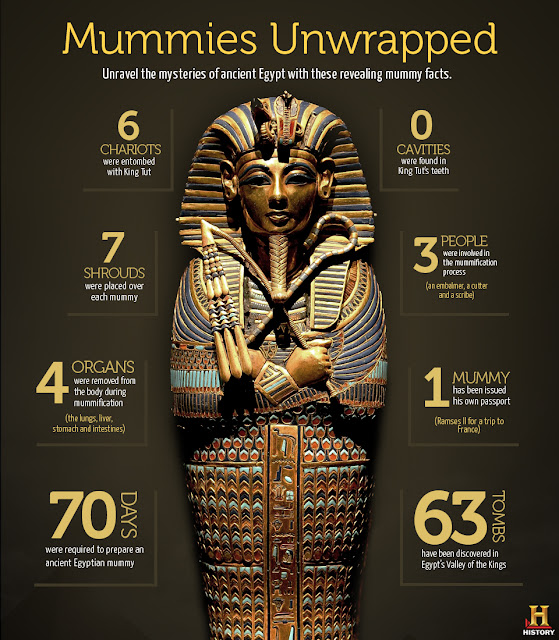 http://www.africanencounters.com/specials/egypt
Did you know that, prior to the 19th century, ancient mummies got none of the respect they have today? Rather than preserving them in museums, people would unwrap mummies and exploit their various parts. Their bones were ground up into powder and sold as medicine, and their wrappings were used to make paint. Some even say that early American paper manufacturers imported Egyptian mummies and made wrapping paper out of their bindings. Thankfully, these practices died out and mummies came to be seen as precious artifacts, which paved the way for some of the most remarkable discoveries in history.

Nicknamed for its red hair, "Ginger" is the most famous of six naturally mummified bodies excavated in the late 19th century from shallow graves in the Egyptian desert. It went on display at the British Museum in 1901, becoming the first mummy to be exhibited in public, and has stayed there ever since. Ginger and the other bodies found with it are the oldest known mummies in existence, dating back to about 3400 B.C. Artificial mummification was not yet a common practice at the time of their deaths, but their bodies were naturally dried and preserved by the warm sand in which they were buried.

The most prominent female pharaoh, Hatshepsut reigned over Egypt for roughly two decades, undertaking ambitious building projects and establishing valuable new trade routes until her death in 1458 B.C. The archaeologist Howard Carter discovered her royal tomb in Egypt's Valley of the Kings in 1902. When he located her sarcophagus some years later, however, it was found to be empty. Carter also unearthed a separate tomb, known as KV60, which contained two coffins: that of Hatshepsut's wet nurse–identified as such by an inscription on its cover–and that of an unknown female. In 2006, a team led by Dr. Zahi Hawass set out to determine whether the anonymous woman in KV60 could be the missing queen herself. The vital piece of evidence was a molar tooth found in a wooden box bearing Hatshepsut's name. When Awass and his colleagues compared the tooth to a gap in the mummy's upper jaw, it was a perfect fit, leading the researchers to conclude that the search for Hatshepsut was finally over.

Ancient Egypt's "boy king" became pharaoh at the age of nine and ruled for approximately 10 years (c. 1333-1324 B.C.). Relatively obscure during his lifetime, Tutankhamen–or "King Tut"–became a household name in 1922, when the archaeologist Howard Carter found his remarkable tomb in Egypt's Valley of the Kings. Despite several apparent grave robberies, the tomb was crammed with a wealth of ancient treasures, including jewelry, gilded shrines and a solid gold funerary mask. The discovery prompted a worldwide fascination with Egyptology in general and Tutankhamen in particular. Carter's partner and financier, Lord Carnarvon, died of an infected mosquito bite several months after the pair opened the tomb. His death inspired the myth of the mummy's curse, according to which anyone who dared intrude upon King Tut's grave would suffer his wrath.

Regarded by many historians as Egypt's most powerful pharaoh, Ramesses II reigned for six decades (c. 1279-1213 B.C.), lived to be over 90 years old and is said to have fathered upwards of 100 children. His body was originally entombed in the Valley of the Kings, as was customary for a pharaoh, but ancient Egyptian priests later moved it to thwart rampant looters. In 1881, Ramesses II's mummy was discovered in a secret royal cache at Deir el-Bahri, along with those of more than 50 other rulers and nobles. In 1974, archeologists noticed its deteriorating condition and flew it to Paris, where it was treated for a fungal infection. Before the journey, Ramesses II was issued an Egyptian passport, which listed his occupation as "King (deceased)."

Valley of the Golden Mummies

Located in Egypt's Western Desert, the Bahariya Oasis was a major agricultural center during ancient times and is now home to several archaeological sites, including a Greek temple dedicated to Alexander the Great. In 1996, an antiquities guard was riding his donkey on the temple's grounds. Suddenly, the donkey's leg stumbled into a hole, revealing an opening in the desert floor and the edge of a tomb. A team of archaeologists led by Dr. Zahi Hawass began excavations of the site, known as the Valley of the Golden Mummies. The first few expeditions have uncovered several hundred mummies that date back to Egypt's Greco-Roman period, as well as a treasure trove of artifacts. The diversity of the mummies' adornments suggests that the site served as the final resting place for every level of society, including wealthy merchants, members of the middle class and poorer inhabitants. Hawass estimates that as many as 10,000 additional mummies may be lying under the sand.

Go to Egypt and see a Mummy for yourself. Check out our very affordable Egypt packages, just click here.