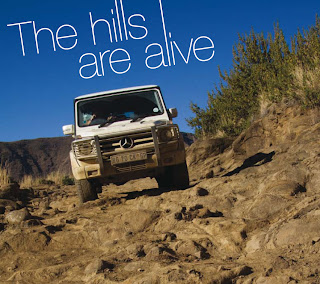 A common Lesotho travel complaint is that people don’t know where to go to find those 4x4 tracks that no-one else knows about. Maliba Lodge has made things easy for you by formally mapping all those lesser-known and hard-to-find tracks in the area surrounding the Tsehlanyane National Park.

The young lad perched on the stone wall looks a perfect picture as our 4x4 purrs past. He doesn’t move, so we stop. I hop out and take a snap, and within minutes I’m surrounded by dozens of the blighters. An elderly lady approaches me to have a chat. “You see, these kids are all orphans; they don’t have parents and we look after them,” she explains. The kids laugh with joy when I show them their images on my camera’s LCD display. 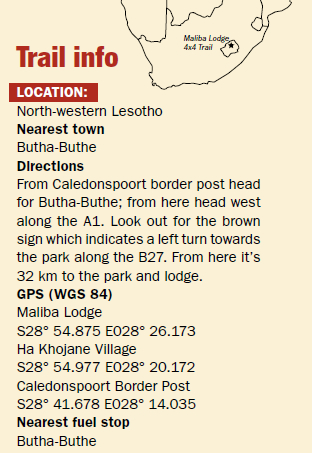 Not many tourists or vehicles come along this track. The atmosphere is relaxed and happy; everyone is friendly and all they want is a chat. “Where do you come from?” “Why are you here?” No-one asks for sweets or money. This is rural Lesotho – untouched and unspoilt. We’ve spent the best part of the afternoon driving one of Maliba Lodge’s 4x4 trails and have seen no other vehicles or tourists, just friendly locals and some pretty tough tracks.

Maliba Lodge lies within the Tsehlanyane National Park, one of the two national parks in Lesotho. The park’s located in the front range of the Maluti Mountains and at the foot of the Holomo Pass. Getting there took less than an hour from the Caledonspoort border post. Once you turn off the main A1 road, it’s good tar road all the way to the park’s gates. They’ve put several speed bumps on this access road as it snakes its way through several villages on the way to the park. While the lodge lies within the park, the five 4x4 trails they’ve mapped lie outside of it. The various trails all start somewhere along the park’s access road. To make life easy for you, each of the five trails has been mapped, complete with GPS co-ordinates.

There’s also a good, detailed description of what to expect. The starting point of the closest trail is only a couple of kilometres from the lodge’s boom gates, while the furthest trail is about 23 km away. We’ve chosen Route B, which is some 10 clicks from the lodge. It has a blue, red and green section and we decided to do all three of them, which should take about four hours. The route goes through several villages and schools.Some sections of the trail have been severely affected by the rain and we have to take great care to ensure we don’t fall into any of the holes the rain has created.

The only traffic we encounter are the many donkey carts, filled to the brim with mielies as it’s harvest time. Our map shows the location of a traditional hut so we stop to take a look. It’s supposed to be occupied by a traditional leader but he has taken off for the day. A local farmer carrying a large bunch of wood on his head stops for a chat. He complains that his mielie harvest is smaller than last year’s.
We drive still deeper and deeper into the mountains. Soon there’s no sign of human habitation besides the occasional passing herd boy. We engage diff-locks as we make our way down a tricky descent, which is followed by a shallow water crossing. The track gets worse and worse but our G-Wagon seems to like it rough. I climb out to guide the driver through a very rocky patch. Just as he’s about to attempt it a herd of donkeys and some locals come whizzing by. They laugh at us as they pass and one stops to ask us the where, what and why.

I’ve never met friendlier people in any of my previous Lesotho visits. I suppose this has to do with the fact that tourists don’t normally drive these routes. The sun starts to slip away behind the mountains and we decide to turn around. We’ve taken longer than the trail guide said we would but maybe that’s because we stopped so often.

It took us the best part of the day to do just one of the five trails, but we did take time to interact with the locals. When you take the main roads that connect the well-known lodges or stopovers in Lesotho you tend to miss what travel is really about. The next time I’m in the area I’m definitely going to try another of the Maliba 4x4 trails. Having driven many more formal trails on private property, this one was a breath of fresh air. Yes, it was on public roads, but these roads are so bad that the public does not use them. They’re perfect for the guy with a 4x4 that wants to get a feel for the real Lesotho, which you don’t get to experience from the main roads.

what a fantastic site it is..4X4 Trailers Melbourne