9 reasons to go to the Serengeti 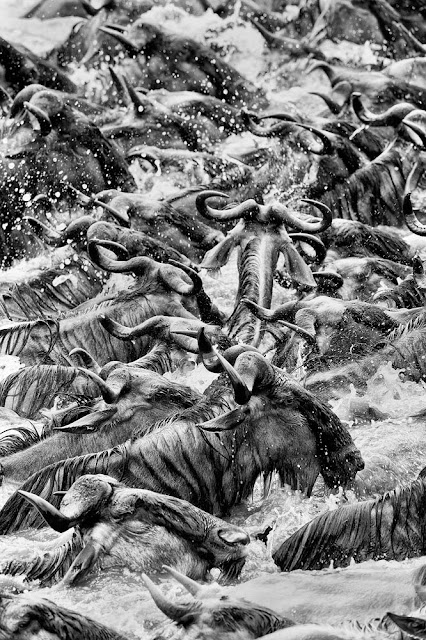 Witnessing millions of migrating wildebeest on the flat-topped Acacia plains of the Serengeti [1] had been on my bucket list for as long as I could remember (read: top eight travel packages for 2013 [2]), until a recent trip to this iconic destination changed that. My criteria in order to tick this one off my list had to be that I saw enough drama, rolling plains and of course…wildebeest. With over 1.5 million wildebeest and zebra trekking over 3 000 kilometers on their epic journey from the Serengeti to the Masai Mara, I was pretty confident that I was going to see enough to check the box. It goes without saying that most people that travel to east Africa want to see the migration at least once. What I didn’t expect was what comes with the migration. It turns out that there’s a lot more to this Tanzanian attraction than galloping gnus. Here are nine reasons why you should put the Serengeti on your bucket list (check out the October issue of Getaway magazine [3] for the full story).

1. Hear over a million grunts

Not only do you get to see the great wildebeest migration, you get to hear them too. I heard the migration before I saw it. The air was abuzz with bleating and grunting so thick it was almost palpable (read: swarms are not just for bugs and birds [4]). The cacophony reached a crescendo as the herd came into sight. As far as I could see wildebeest dotted the plains. I had seen large herds of wildebeest and buffalo in the Kruger National Park before, but nothing on this scale. The sheer volume of wildebeest is thrilling to see and also hear.

2. Magical sunsets over the plains

Watching the sun set over the Serengeti plains is magical.
Photo by Claudia Hodkinson.

The Masai have a name for it ‘Siringet’ or ‘the land that goes on forever’. Great stretches of grassland dotted with flat-topped Acacia trees give the Serengeti a moving sense of space. Everyday I would watch the sky turn a palette of pinks, purples and oranges before disappearing over the horizon. The dust that had been kicked up from the migrating wildebeest and the threatening rain clouds added drama and magic to the whole scene. It will ignite your soul and give you that ‘Out of Africa’ goose bump feel.

Already a few months old, youngest were very much a part of the landscape.
Photo by Claudia Hodkinson.

The herd was moving up the western corridor of the Serengeti when I arrived. Calves were already a few months old and males were starting to lock horns and strut their stuff for the rutting season. Each stage of the annual migration is unique. Depending on what time of year you go depends on what you’ll see. You may be lucky enough to watch wildebeest make the death-defying jumps across the crocodile infested Grumeti and Mara rivers or witness around 500 000 calves born during calving season. Whatever stage of the migration you experience it promises to deliver a healthy dose of drama and magic.

A lucky sighting of two young leopard cubs with their mother up a tree.
Photo by Claudia Hodkinson.

Even though one can get fully mesmerized by watching wildebeest, it’s good to know that the Serengeti has a prolific array of other wildlife; and big game at that. A herd of elephant with calves, a mother leopard and her cubs playing in a tree, an impressive herd of buffalo, a mating pair of lions and a bulging pod of hippo were some of the other wildlife I ticked off my list. Wild dog, lion, cheetah, jackal and hyena are often seem tailing the herds of wildebeest, zebra and Thompson’s gazelle. With so much on the go, it’s not hard to see a full spectrum of African wildlife whilst on safari.

One the many colourful birds I saw in the Serengeti: the Blue-cheeked Cordon Bleu.
Photo by Claudia Hodkinson.

The diversity of birdlife is impressive and makes for a refreshing addition to the trip. Being a bit of a bird-a-holic, there were over 500 species to jumpstart my addiction. Highlights included watching marabou storks searching for juicy morsels in freshly burnt grass, a male ostrich displaying for his female and a pair of crowned cranes calling to each other. Birds such as the blue-cheeked Cordon Bleu (no it is not a lunch special), raptors flying the thermals and pink flamingoes at Lake Manyara are common sightings.

An impressive buffalo in the Ngorongoro Crater staring straight into the lens.
Photo by Claudia Hodkinson.

The Serengeti is surrounded by a number of terrific bolt-on destinations that will compliment your east African safari. I was not disappointed that my tour included a jaunt to the nearby Ngorongoro Crater and Lake Manyara National Park. They were both special in their own right. The Ngorongoro Crater, a large volcanic caldera, is a stronghold for an impressive variety of game such as black rhino, elephant and buffalo. The diversity of habitats and wildlife inside the crater made it a worthwhile visit and I would highly recommend extending your trip to include a few different locations if time and budget allow.

One of the highlights was watching the 'jumping dance' of the
Masai men with their colourful dress.
Photo by Claudia Hodkinson.

The Masai tribesmen, with their brilliant red dress accompanied by their tinkling cowbells, are as much a part of the Tanzania landscape as the many wild animals that are found there. Taking a walk through one of the local villages dotted with cattle-dung huts, watching their ceremonial ‘jumping dance’ and learning about their culture was a great way to get a snapshot of the Masai way of life. Tanzanians are very friendly people with big smiles. Make sure you buy a bunch of red bananas from a local vendor, stock up on colourful Masai blankets and bring books and pens to hand out to excited village children.

The views over Lake Manyara from the lodge were worth waking up early for.
Photo by Claudia Hodkinson.

There’s a variety of accommodation options available in the Serengeti. I stayed in the luxury Serena group of hotels, which delivered not only comfortable rooms but also incredible views over Lake Manyara, the Ngorongoro Crater (our lodge was located on the rim) and over the Serengeti plains. Each lodge had a different theme and I particularly loved the ‘bushman paintings’ on the room walls, the full-length windows and warm fires at Ngorongoro Serena Safari Lodge. Waking up with the sun rising over the Tanzania landscape was a real treat. It was great to return to warm face towels, turndowns at night and friendly staff after an exciting day on safari.
How to camp in the Serengeti National Park [5]

Catching a leopard’s coat in the honeyed light of the fading sun, freezing the motion of wildebeest on the run or capturing the confusion of black and white stripes of zebra en masse. There are loads of photography opportunities in the Serengeti, made easier with safari vehicles with pop-up roofs. This was a super convenient feature when we were out on game drives. Not only did this allow a 360 degree view of your surroundings, it was a great vantage point to shoot pictures from. If you’re not admiring the scenery, you’ll be clicking away to share your experience back home.